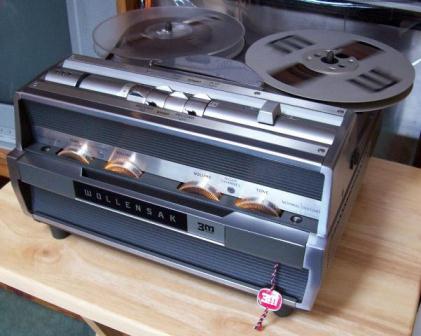 Please be sure to read my friend Richard Michael Vosburgh's 1580 story. The link to his story is at the top of this page. He owned a brand new 1580 back in 1962, a present from his parents.

My name is Shane C. Collins and I live in Williamsport, Pa. I have been collecting Reel to Reel tape recorders since I was about 15 years old.

I would like to dedicate this page to the first portable (stereo) Reel to Reel tape recorder produced by Wollensak, back in 1962. In 2008 I purchased a 1580, and I discovered a machine that is capable of producing beautiful music ! The tube quality sound it produces is quite nice! I hope you enjoy the site. Feel free to visit my contact page, and send me a message. It is linked to my main email account which I check each day. Wollensak took the basic mechanism, designed a modern "aircraft construction" shell to house it, a simple 3-key and slider control system, and a compact amplifier. The resulting unit was small, light, stylish, and an instant hit. The "1500 series" was born. Over the next few years Wollensak/Revere would make refinements and optional versions of it. The original T-1500 was a half-track (2-track mono) recorder with a unique (for the time) amplifier, using an interstage transformer instead of a phase inverter to drive its push-pull 12AB5 amplifier. It had Record, Play, and Public Address capability which made it a hit with lecturers, schools, etc. The amplifier is often seen on eBay being sold as a "guitar amp" or other non-tape recorder usage. Variations of the 1500 quickly appeared. One of the first was the T-1515, a Stereo version. The 1515 replaced the standard mono head with a stereo head and added a small preamplifier for the second channel. By plugging the unit into a stereo system or adding a satellite speaker/amplifier the then-new Stereo tapes could be played. Recording was still only mono, however. This was quickly followed by the T-1515-4 as the industry went to 4-track tapes. The head system was redesigned to include the new head and to provide a selector that moved the head up and down. The 4-track setting allowed for playing prerecorded 4-track stereo tapes. There was also a 2-track setting that lowered the head slighly so it tracked 2-track tapes without the loss in channel one that was common to other brands. A 3rd position allowed for recording 4-track mono by shifting the active (recording) poles to the different parts of the tape to accomplish this. Others would adopt this approach too, including Webcor & Akai/Roberts.

Small internal improvements were made, mostly to the idler wheel carriers and later to the rewind arm but the drive mechanism was essentially still the original Revere design. There was also an "economy" series of the two then-current 1500 models (T-1500 & T-1515-4): the "1400 series". The T-1400 and T-1440 were identical to the 1500 units except they were painted a dark gray instead of having the brushed or polished bare aluminum of the regular units. For the "deluxe" end of the market they redesigned the shell and added pushbuttons and relays to make soft-touch controls and the possibility of remote operation available. The T-1600 & T-1616 were never great sellers but did look spiffy and added prestige. The demand for mono recorders was falling, however, and what there was for it was increasingly being filled by cheaper units from Japan. Wollensak needed a stereo recorder to compete. The engineers took the base mechanism and redesigned it to incorporate power-assisted operation and a new 2-channel amplifier. The case got a totally new look and side-mounted speakers.  The T-1580 was an instant success and had fairly good specs for the price. Ads with name musicians appeared in several publications. It retained all the traditional features, including PA ability. A mono version, the T-1570 never caught on, but the 1580 remained in the catalog for a few years.

Today many of these Wollensak tape recorders can be found at online auction sites like Ebay. Some bring top dollar. Most of the "1500 series" machines can be had for under $ 100 dollars. The "1515" and "1515-4" are the easiest to find. The 1580 is not always the easiest to locate. The 1580 showcased on this page was located on Craigslist.com. I am the second owner of this wonderful machine ! The seller had purchased this brand new for his Father in 1963. Many of the accessories located on my "photo gallery" page came with this 1580.